Elad Shippony, of Israel, isn’t your typical affiliate marketer. He and his wife and three children now live in their home, which was paid for COMPLETELY by his online earnings.

Come to think of it, ANY affiliate should be able to learn something useful from a guy who has figured out how to attract nearly 2 million unique visitors a month. 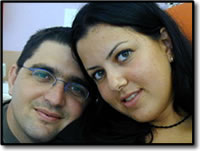 Elad’s huge success began when he and his sister, Tamar (pictured, RIGHT), both online marketing “amateurs”, created a simple (and fun) website, and in under six months turned it into a high-ranking, high-traffic, profitable source of income.

Elad then went on to build more websites and now has eight highly successful websites attracting a total of nearly 2 million unique visitors a month – all done without hiring employees.

He was working in a demanding job. The pay was all right, but he wasn’t home much and all the family time he could manage with his wife and new daughter, Maya, was just a few hours at weekends.

“I often caught myself daydreaming of how great it would be to work from home, be my own boss, be able to shut the computer whenever I wanted and play with Maya or go out to the cafe with my wife in the middle of the day,” he says.

One day he stumbled on a free 5-day email course that promised to enhance his online writing skills as a first step towards building an online business.

“It may sound a bit dramatic, but I regard that very moment of signing up as a turning point in my life.

“I have no better way to describe the course besides mind-boggling! It helped me understand that the key to earning a living from a website is not by going out and learning HTML, graphic design or any other technical stuff (which already had me quite confused).

Learn to write words that can sell

“The key is first and foremost the ability to WRITE words that can sell,” Elad says.

After the the final installment of the course, he immediately bought an ebook co-written by the same author who wrote the free course, Dr Ken Evoy.

If you know Ken, you’ll know he has a polarizing effect on Internet marketers – they tend to either love him or hate him. Elad, who is one of SBI’s best success stories, is highly enthusiastic about Ken and SBI and how they change people’s lives.

Whatever stage you’re at – just beginning or able to buy a house with your earnings – it’s worth while studying how Elad achieved his online success because, as they say, “Success leaves clues.”

Elad began experimenting, using his newly acquired knowledge on how to write to sell.

His sister Tamar was an artist but was working day and night as a waitress. So Elad built her a small website to promote her murals for children’s rooms.

“In a matter of weeks Tamar was getting more than five calls a day (all via the website), closing lots of work – her average mural was about $250 – which was about one whole week of waitressing. She left her waitressing job and began focusing only on painting murals.”

Next, came a call for help from a family friend, Ami Adini, of California, who had learned of Elad’s new skills. Ami, an environmental consultant, had paid to have a company website built but it hadn’t generated even a single lead. So, from his home in Israel, Elad rebuilt the California-based site. His friend is delighted with the new business and newsletter subscribers the website now attracts.

By now, Elad says, his day job was getting more and more intense. “I was barely seeing my family, I was dragging myself to work…”

However, he had a family to support. He couldn’t just quit.

“So one day I just got up and said to myself – ENOUGH! It’s time to start moving towards my real goals.”

Skeptical, but he went ahead

He had read about SBI, an e-business building platform, which sells itself as an all-in-one site-building, site-hosting, site-promoting suite of tools. It aims to eliminate all the confusing technical complexities involved in building and promoting a site, and leaves you with the fun part – creating content.

He was skeptical, but he took a deep breath and bought SBI, with the goal of creating an online business that would make enough money to equal or better his salary.

He studied SBI’s 10-chapter Action Guide, which starts by guiding you while you choose a profitable niche. (SBI now includes a Site Concept Finder.) By the end of the second day, he knew he had to choose a topic that was close to his heart. For him travel or backpacking seemed obvious choices.

However, he didn’t just dive in.

Instead he used SBI’s tools to examine the demand and supply for backpacking-related information on the Internet. Unfortunately, there was much more supply than demand.

“Now, I was never really any good with economics, but low demand versus high supply was a definite no-no…”

So Elad asked his sister to help him choose a topic.

For a week, she studied the first few chapters of the Action Guide and researched various topics, and then surprised Elad by suggesting the theme “kid birthday parties.”

Then he thought about it… He had a little daughter and a little girl on the way. He liked doing creative things. He loved birthdays and parties. It WAS a good idea.

So he asked Tamar to help him build the website.

“Tamar and I did lots and lots of research on kid birthday parties and started experimenting with our ideas on kids and during parties whenever the opportunity arose. We wrote up lots of content for the site and I was in charge of strategy and building the site from a technical aspect (although, with SBI!, you really don’t need any technical knowledge because you can build a site through simple building blocks and monitor every aspect of traffic through a consolidated control center.)”

In no time, they became totally absorbed in kid birthday parties.

The underlying philosophy is to rank high in the search engines for words and phrases that are in high demand, so you attract lots of people to your site. You recommend good products and services, and people click on your links and buy products, earning you a commission.

You build an online business based upon what you know, from work experience, hobbies, passions, or pasttimes. If you know your subject matter, and if you’re motivated to build a REAL business with growing, diversified revenues, the SBI method will suit you perfectly. You can learn more about infopublishing here.

Within four months of starting the site, it had generated a net profit of nearly $1,000 and 500 people had subscribed to their newsletter.

Elad spent a week on vacation, scuba diving, not touching his computer. The site continued to work as usual.

Two months later, commissions hit $2,000 and since then his income has kept on increasing, naturally with some fluctuations.

He quit his day job eight years ago – much earlier than he expected.

From that small start in one niche, Elad has branched out and now owns a group of eight “coolest” websites, including one on birthday cakes and another on home-made costumes. The costumes site alone averages more than 120,000 visits a DAY during Halloween season!

By 2009, he was getting, on average, 1.5 million unique visitors across his three main sites.

“This morning a ‘C2 Tsunami’ hit one of my sites. I received around 500 new Content 2.0 (C2) submissions in the span of 24 hours yesterday! Even I find it hard to believe that 500 people created and sent me content-rich Web pages in ONE DAY!”

These visitor-generated pages were created with the help of SBI’s Content 2.0 Module, which makes it easy for SBI users to invite their website visitors to submit stories of their own experiences.

Some SBI users have hundreds or even thousands of visitor-generated pages and photos – valuable, original content for the search engines to find.

“Oh yes, one more thing. In a few months we’re moving into our new house built 100% from SBI income.”

His sister has moved to the United States to focus on her main goal – her art. When she can – mainly during vacations – she provides website content and inspiration while Elad does the rest.

Now with more time on his hands, he has achieved another goal. With a musician partner, he does live performances telling stories about his travel experiences. Of course its marketed via another website he built. He has also achieved another longtime goal – he plays soccer.

Some days he works, some days he doesn’t. He loves the freedom that owning his own business gives him.

He says he has a rule that he closes his computer every day from 4pm to 8 pm to spend quality time with his family.

(I love what his 10-year-old daughter has to say in Elad’s latest update. His new home office looks good, too!)

Constant improvements have been made and new modules added to SBI since Elad built his first SBI site. The new BlockBuilder 2 (BB2) and the new Site Designer are continuously undergoing new releases, updates and slick additions.

For example, if you’re using some other web host and site-building method, your web host won’t have provided you with all these recent SBI additions.

If you’re an experienced affiliate, I recommend you compare feature-by-feature what you can now get from SBI versus other business-building methods. SBI really is incredible value. I’ve been using SBI and recommending it for a decade.

It’s hard to imagine anyone who would be better suited to answer your questions about infopublishing than Elad Shippony.

Mark this time and date in your diary…

I expect this Q & A session will be really busy – and fascinating.

To learn more about Elad’s Question and Answer session, go to this page on SiteSell Facebook right now to ask your questions in advance.